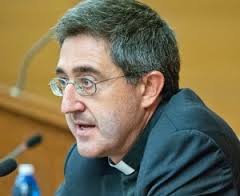 Rev. José Granados DCJM is a professor of theology of marriage and family at the Pontifical Institute of John Paul II at the Lateran University in Rome, of which he is also Vice President. He has earned a doctorate of Theology from the Pontifical Gregorian University, Rome. He was appointed by Pope Francis in April 2013 as a consultor to the Congregation for the Doctrine of Faith. He has published several books on the issues of the theology of marriage. Prof. Granados is co-author, with Carl Anderson, of Called to Love: approaching John Paul II's Theology of the Body, an introduction to the theology of marriage of the last popes.